Ricki and the Flash Review - 3 Stars 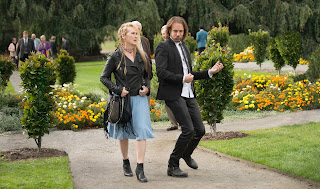 Meryl Streep looks a fright in “Ricki and the Flash.” She’s an aging rock and roller, leading a cover band that plays dive bars full of senior citizens. That’s her weekend gig. During the week, she works as a grocery store checker. Music was her dream, and we soon learn she left her husband and three children to follow it. Her daughter’s sudden divorce and suicide attempt calls Meryl back to the family she left. They do not receive her with open arms, but she does have a good influence on her daughter played by Streep’s real-life daughter Mamie Gummer. I especially enjoyed Audra McDonald as Kevin Klein’s second wife and the woman who raised the children Meryl left behind. The two women face off, and provide a high point. Streep and her band (including Rick Springfield) perform 12 songs - baby boomer rock and roll oldies. The performances enhance the usual family dysfunction story. Streep makes this complicated character interesting and thought-provoking. She pays a price for following a dream, and leaves us to ponder the result. Does it deliver what it promises? Interesting family musical drama with no easy answers. Is it entertaining? Very much. Is it worth the price of admission? Yeah, a ticket to a Meryl Streep movie is always money well spent.
Posted by Arch Campbell at 11:40:00 PM