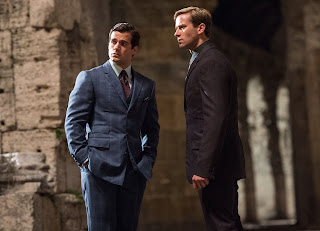 “The Man from U.N.C.L.E.” has several things working against it. First, it opens on the heels of “Mission Impossible:  Rogue Nation” - a stellar spy thriller. Next, it tries to recreate 1960′s style and the old television show on which it’s based. The problem is: It succeeds. It looks like a 1967 movie, which is to say it’s slow, talkative, and predictable. Henry Cavill starred as Superman in “Man of Steel.” He makes an O.K. spy as the character Napoleon Solo, but he lacks the charm of old school guys such as Sean Connery, who once starred in stuff like this. Armie Hammer plays Illya Kuryakin and adds a bit of fun to a very slow script. Rising star Alicia Vikander fills the femme fatale spot as the daughter of a brilliant scientist, kidnapped by the bad guys. She works both sides of the plot in a storyline almost identical to that of the recent “Mission Impossible.” I think director Guy Ritchie wanted to pay tribute to the 60′s. Instead, he’s churned out a stale spy story with little to recommend. Does it deliver what it promises? Not even close. Is it entertaining? Slow. Is it worth the price of admission? An August dud.
Posted by Arch Campbell at 3:17:00 PM