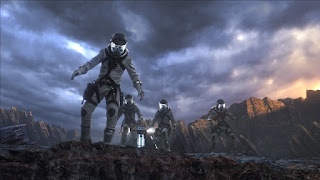 Those who attend “Fantastic Four” expecting the usual Marvel magic are in for a huge disappointment. This reboot gets bogged down by a dull script, that delays any action until almost two-thirds of the way through. Miles Teller plays the grown up Reed Richards, who as a child dreams of building a teleporting machine - a way to a parallel dimension. He and his friends get government funding, build their dream machine, get into it and something goes very very wrong. Richards comes out with the power of elasticity - he can stretch. Kate Mara can float in a bubble. Michael B. Jordan flies and has the ability to flame - and Ben Grimm turns into “The Thing” - a guy made of stones, who can fling them at will. Their colleague Toby Kebbell gets the biggest dose of whatever it is they get in the other dimension and turns into the arch-villain Dr. Doom. The audience laughed at several moments of grade C dialogue. The special effects look cheap... like something out of a movie 20 years ago. I did enjoying seeing Reg E. Cathey - the guy with the barbecue joint in “House of Cards” - as the father figure of the four. He’s got the best pipes in movies. Too bad he’s in this one. Does it deliver what it promises? Comic superheroes, in a less than fantastic movie. Is it entertaining? Pretty bad. Is it worth the price of admission? No thanks.
Posted by Arch Campbell at 11:31:00 PM