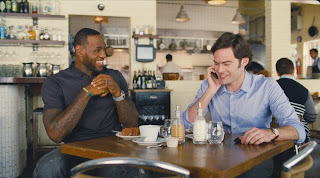 Amy Schumer joins the comedy ranks of Melissa McCarthy and Kristen Wiig in her debut film “Trainwreck.” Based somewhat on her life, the story begins with an outrageous comic rif/ explanation by grizzled Colin Quinn to his two young daughters of why he is divorcing their mother. That awkward moment leaves Amy convinced monogamy is impossible. We flash forward to Amy as a young woman, working for a snarky magazine, drinking to excess and participating in copious amounts of casual sex. Amy insists her partners never stay the night; so imagine her surprise, when she’s assigned to interview a sports doctor played by the very appealing Bill Hader. They hook up and she stays over, and now must deal with the confusion the possibility of relationship causes her. The writing in “Trainwreck” (Schumer wrote the script) is as satisfying and hilarious as comedy movies get. I put it alongside “Bridesmaids” and “The 40-Year-Old Virgin.” Both are Judd Apatow projects, and he directs “Trainwreck” and most certainly influenced the final product. “Bridesmaids” made Melissa McCarthy a star, and “Virgin” launched Steve Carroll’s career. “Trainwreck” gives some wonderful moments to a great cast, including Tilda Swinton as the world’s harshest editor, Bree Larson as Amy’s more-settled little sister, and LeBron James as Hader’s best friend. LeBron plays an exaggerated version of himself, and steals almost every scene. The dialog marches right up to sentimentality and then pops a zinger so good, you almost miss the next one. I can’t wait to see where Amy Schumer’s career takes her. Does it deliver what it promises? Relationship comedy. Is it entertaining? Delightful in a very “R” rated way. Is it worth the price of admission? Absolutely, except for the non “R” crowd.
Posted by Arch Campbell at 9:06:00 PM