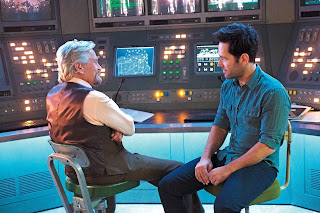 “Ant-Man” proves once again that the Marvel movie machine knows what they’re doing. The film follows a proven formula: Paul Rudd plays a down-on-his-luck Robin Hood thief, who lands in jail and loses his wife and daughter. Recruited by super scientist Michael Douglas, Rudd fits into a special suit in which he can shrink to the size of an art or burst back into human form. Several fight scenes include Rudd shrinking and unshrinking. The suit also lets him communicate with ants, whom we learn have many skillful traits... They fly, work collectively, and even sting when necessary. Evangeline Lilly adds a love interest as Douglas’ daughter. Character actor Corey Stoll, one of those guys you see and think “who is that guy?” makes a nice foil as Yellowjacket. Michael Pena adds great humor, as an over-talkative fellow burglar working with Rudd. The plot boils down to saving the world and impressing Rudd’s ex-wife and daughter. “An-Man” delivers a better-than-expected movie, thanks to Paul Rudd who makes this fellow quite likable. Does it deliver what it promises? Another character for the Marvel stable. Is it entertaining? Easy to watch, although about 20 minutes too long. Is it worth the price of admission? For Marvel fans, complete with two teaser scenes after the end credits.
Posted by Arch Campbell at 3:47:00 PM