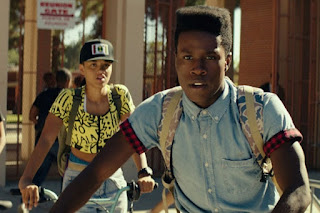 “Dope” begins with the definitions, which set you up for a hilarious coming-of-age, "in the 'hood" comedy. There’s dope that people take, dope as the name for the less-than-smart, and dope as slang for those who really get it. Shameik Moore plays a high school nerd trying to get through his days without getting shot or getting his shoes taken. One night on a detour home, he catches the eye of neighborhood drug dealers; and thanks to a pretty girl and a comedy of errors, winds up with a backpack full of drugs, which interfere with his plans to makes his way to Harvard. “Dope” showcases current music, slang, sly comedy about white and black worlds, and gives you a cast of characters to love. I think “Dope” will be remembered as a great reflection of 2015. Does it deliver what it promises? Fun and funny. Is it entertaining? A delight. Is it worth the price of admission? This is one of the movies you need to see this year.
Posted by Arch Campbell at 9:46:00 PM