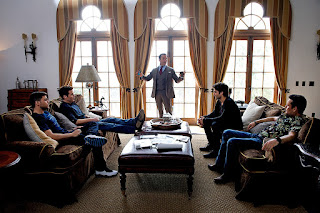 “Entourage” the movie extends the HBO series for yet another adventure of Jeremy Piven as Hollywood super agent Ari Gold and his client Adrian Grenier, who in this episode gets $100 million to make a blockbuster special effects, modern day version of “Jekyll and Hyde.” The movie, and the movie within the movie turn out mostly Jekyll. The story begins with an over-the-top yacht party, featuring Grenier and his posse - Jerry Ferrara, Kevin Connolly and Kevin Dillon. If you watched the series, you know that Grenier hit it big in a commercial for Mentos; and when Hollywood beckoned, he brought his three best friends from the old neighborhood along for the ride. They remind me of the gang in “Swingers,” and speaking of “Swingers,” Jon Favreau is one of many celebrities popping up for cameos as one of the gags in this jokey “inside” story of Hollywood. Quick lines spew from Kelsey Grammer, Jessica Alba, Mark Wahlberg (he produced this after all) and as the biggest surprise... Warren Buffet.

The plot has Jeremy Piven as agent Ari Gold, enticed out of retirement to run a studio. Piven made his name on the HBO series as a high octane, often angry but hilarious character taking “over-the-top” to new heights. Ari hires Grenier to star in his first studio head project, and Grenier demands to direct. The clip of the movie shown within the movie “Hyde” looks the kind of high octane computer effects story that audiences are starting to tire of - it’s not bad enough to be a punchline of “Entourage” and not good enough to serve as the example of the wonderful film Grenier has created. $100 million won’t get the job done; so Piven has to go to Texas to beg billionaire Billy Bob Thornton for more. Instead Billy Bob sends his ne'er-do-well son to oversee his investment. The role of the son marks the return to movies of Haley Joel Osment who made such an impression as a child in “The Sixth Sense.” This character isn’t a great return for Haley Joel. In fact, when the movie finished, I felt most sorry for him... both as a character and as an actor. So there’s the plot - Will Grenier get his extra millions to finish his movie? Will Haley Joel get to taste the Hollywood life of a movie star? Will Ari Gold keep his studio? And will Grenier’s pals continue to flourish? In fairness, if you haven’t followed the series closely, you can follow the movie; but I doubt it will turn you into a fan, and the series is long gone anyway. The nudity and sex reminds me of “The Wolf of Wall Street” - so much of it that it turns tiresome. So does most of “Entourage.” Does it deliver what it promises? Another episode of the old HBO series “Entourage” with plenty of nudity, cursing, and high living. Is it entertaining? Wore me out. Is it worth the price of admission? In these days, when workers are pleading for a decent wage, a movie about a pretty boy who can’t make a movie for $100 million dollars feels like the biggest misfire since “Sex and the City 2.”
Posted by Arch Campbell at 8:55:00 PM