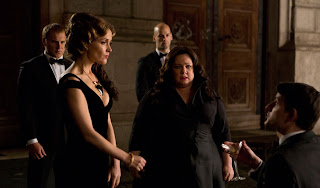 Melissa McCarthy lampoons every James Bond movie ever made in “Spy.” In the process, she turns out the funniest summer comedy since “Bridesmaids.” As usual, McCarthy spews hilarious, filthy ad libs and performs outrageous stunts, while making us cheer for her character. She’s an in-house CIA agent, working in a rat-infested basement, guiding with satellite and computer help the dashing spy Jude Law (whom she desperately loves.) Something goes wrong and super villain Rose Byrne kills him. McCarthy vows revenge. CIA director Allison Janney elects to send her into the field, because no one will believe she’s an agent. Her covers add to the humor  - always a single mother or a cat lady with a terrible wig and awful clothing. Rouge agent Jason Statham ups the comedy as an apparently immortal agent. Paul Feig directed “Bridesmaids” and gives “Spy” the same kind of pulse and humor. Miranda Hart of “Call the Midwife” adds to the fun as Melissa’s fellow house agent, who winds up in the field. Hart’s British accent and string bean looks play great with McCarthy’s bigger than life presence. I didn’t expect much and walked out saying “That was Great!” Does it deliver what it promises? Melissa McCarthy comedy delivers great laughs. Is it entertaining? Sneaky funny. Is it worth the price of admission? If you only see one movie this month, make it “Spy.” It’s worth the price of admission to see McCarthy get in a scooter with a roof, start it up, and fall over on her side.