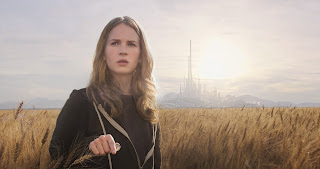 One of the big draws of “Tomorrowland” - George Clooney, begins the movie with a confusing speech interrupted by teenaged Britt Robertson, who over the course of the movie becomes the hero of the piece. It seems our world is threatened by war, political unrest, disease, and global warming. Britt’s sunny disposition has the answer: Optimism. The plot gets even more convoluted, as it goes back to 1964 with a young version of Clooney lured into the future by a mysterious young woman: Thomas Robinson and Raffey Cassidy fill those roles. Then we return to the story of the optimist (played by Britt) who receives a magic pin, which transports her to the future. “Tomorrowland” runs way long with too many violent scenes of robots, who don’t want our cast to make it to the future – a now bleak place, run by Hugh Laurie. With a running time of two hours plus, I kept wondering “How about ending this today?” Does it deliver what it promises? Kid adventure with a lot of violence and a hard to follow plot. Is it entertaining? Long and confusing. Is it worth the price of admission? I pass.
Posted by Arch Campbell at 3:05:00 PM