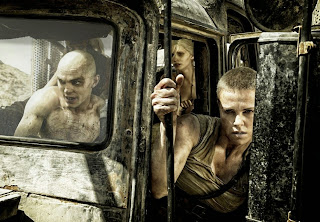 “Max Max: Fury Road” - This is not a movie. This is insane. George Miller - now 70 years old - remakes his original often copied after the apocalyptic thriller - and jams it down our collective throats. Just like the original, it’s the future, nobody has any gas (or water or bullets) and everybody’s driving around in cars, shooting at each other or unleashing cascades of water every now and then. Who really needs this to make sense? We begin with an introduction to Tom Hardy - now one of the busiest actors in movies and one of the guys I always want to watch - eating a lizard, and then getting captured by a band of mean dudes who control water, bullets and gasoline and (literally) want Hardy’s blood: I guess he’s a universal donor? Charlize Theron - now almost as tough as Mel Gibson in the original - takes off on a gas run and then goes rogue. She kicks off an insane chase with outrageously wonderful details, including a guy with a propane-powered guitar - riding along, to create atmosphere. Does the phrase “like watching a car crash?” mean anything to you? But wait, there’s more! Hot babes, including sexy supermodel Rosie Huntington-Whiteley - plus rising star Nicholas Hoult (I can’t remember why but I like this guy) and a group of female elders ready to kick butt. I doubt that grown ups will flock to “Mad Max:  Fury Road,” but if they do, they will be shocked to discover it undeniable. Does it deliver what it promises? Insane chase after the apocalypse. Is it entertaining? Relentless. Is it worth the price of admission? Can't be denied.
Posted by Arch Campbell at 9:34:00 PM