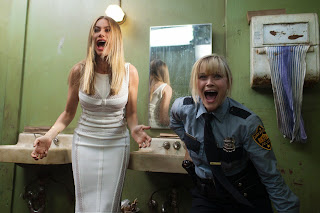 “Hot Pursuit” reminds you how ordinary the mismatched buddy comedy has become. This one’s a pale imitation of “Midnight Run,” “The Heat” and especially “Thelma and Louise” to which it doesn’t even come close. Reece Witherspoon plays a tightly wound San Antonio policewoman, assigned to accompany a cartel boss’ wife to trial in Dallas. Sofia Vergara endures numerous lazy jokes about her chest, age, and Spanish accent. Very quickly, the two women wind up chained to each other, chased by rogue cops and cartel members. Witherspoon and Vergara’s name and charisma will probably draw some viewers; but the two of them can’t put over a tired, unfunny script. Does it deliver what it promises? Mismatched buddy comedy, but not funny. Is it entertaining? Tiresome. Is it worth the price of admission? A resounding No.
Posted by Arch Campbell at 8:42:00 PM