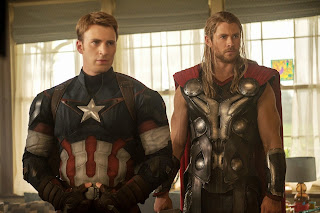 Summer movie season officially arrives in “Avengers: Age of Ultron.” May is the new summer, and comic superheroes are the preferred summer material. “Avengers: Age of Ultron” reunites the Marvel characters as played by superstar actors including Mark Ruffalo (the Hulk), Scarlett Johansson (Black Widow), Chris Hemsworth (Thor), Jeremy Renner (Hawkeye) and Chris Evans (Captain America). Robert Downey Jr. continues to lead as Iron Man. The group reassemble to fight Ultron - a computer generated artificial intelligence robot with evil on his mind. James Spader voices Ultron and sounds like he’s channeling Brian Cranston in “Breaking Bad” - which I view as a good thing. The robot versus good guys plot delivers one of the more satisfying elements of a long overstuffed action movie. Fans get a bunch of extended battle sequences, each of which showcase the characters individually. This showcasing takes time, extending this chapter to two and a half hours. A lot of the battle scenes feel run of mill. Better is a hint of romance between Scarlett Johansson and Mark Ruffalo. The rising star Elizabeth Olsen shows up with Aaron Taylor-Johnson as a creepy Russian sorcerer who comes to her senses and joins the gang. “Avengers:  Age of Ultron” will satisfy fans; but don’t expect anything new. “Age of Ultron” does what it needs to do. Does it deliver what it promises? Reunites the Marvel stable of superheroes and throws a few new characters in as well. Is it entertaining? Does what it needs to do. Is it worth the price of admission? For fans.
Posted by Arch Campbell at 3:37:00 PM