The Ides of March Review - 4 Stars 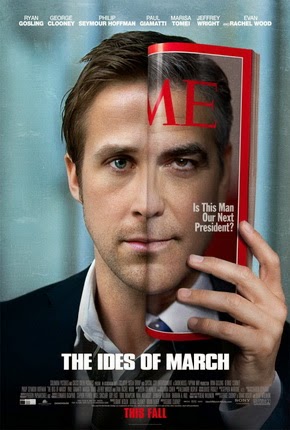 George Clooney plays a presidential candidate, Ryan Gosling the man behind the candidate. Clooney directs, but the movie belongs to Gosling - as a true believer, who learns about politics the hard way. The opposition offers Gosling a job, and the offer leaks to the press. Suddenly the political innocent has to pull a few fast ones to keep his job. The plot thickens as Gosling accepts the overtures of sultry intern Evan Rachael Wood. This behind-the-scenes story unfolds in a compelling script, performed by one of the year’s best casts, including Paul Giamatti and Phillip Seymour Hoffman. Old school and grown up in the best sense of the word, I simply enjoyed every minute of “Ides of March.” Does it deliver what it promises? Political thriller. Is it entertaining? Great cast and script. Is it worth the price of admission? A movie like they used to make.
Posted by Arch Campbell at 11:31:00 AM