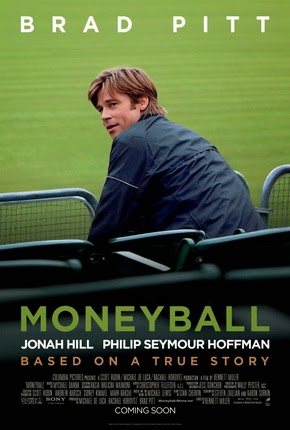 In “Moneyball,” Brad Pitt plays Billy Beane, General Manager of the Oakland A’s baseball team in 2002. With no money and most of their good players lured away by bigger clubs, the season looks dire. So Pitt as Bean embraces the theory of a statistics nerd played by Jonah Hill - who reasons getting men on base and upping the team’s stats holds more weight than depending on a handful of gifted, but expensive players. Once Jonah Hill comes into the picture, the story turns into a buddy movie. A subplot explores Bean’s failed marriage and his relationship with his daughter. And a back story explains Bean’s brush with the majors and his disappointment as a player. “Moneyball” has a lot to say about thinking outside the box. It achieves this with sparking dialog courtesy of the great Aaron Sorkin. Brad Pitt takes this role and makes it his own - so good he reminds me of Robert Redford at his best. I just loved every minutes of “Moneyball," one of those rare movies like they used to make, where you care about the characters, laugh at the story, and can’t wait to see how things turn out. Does it deliver what it promises? Great story. Is it entertaining? Great fun and highly interesting. Is it worth the price of admission? Without a doubt, one of the year’s best.
Posted by Arch Campbell at 11:24:00 AM