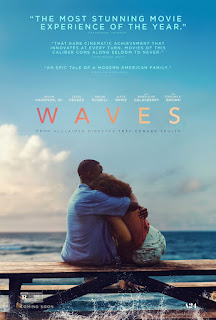 "Waves" presents family drama at its most intense. Sterling K. Brown stands out as a hard-driving father who watches his family tear apart. Taylor Russell surprises as an unexpected  agent of healing. Creatively produced with music and images outside the box. 3 stars, rated "R."
"Waves" begins as not much more than another father son drama. Sterling K. Brown puts the pressure on his son Kelvin Harrison Jr., a wrestling champion and high school hero. The kid appears to have it all, a prosperous black family and an adoring girlfriend. Injury, drugs, and rage intervene, and lead to tragedy. And then "Waves" makes a turn, widening the story to view the entire family, including younger sister Taylor Russell, and step mother Renee Elise Goldsberry. The sister's budding romance with Lucas Hedges leads to an even more surprising turn. Those turns and surprises elevate "Waves" far above the usual family drama. 3 stars, rated "R."
Posted by Arch Campbell at 5:02:00 PM