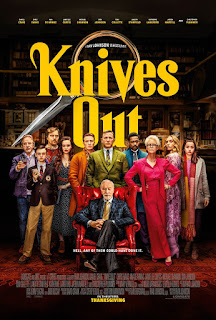 "Knives Out" pokes gentle fun at the classic who-done-it? with a touch of social commentary and an all star cast. Rates 3 stars and a PG-13 rating, just for the fun of it.
"Knives Out" hands Christopher Plummer the juicy role of a despised family patriarch and mystery writer. whose death brings his entire dysfunctional family under suspicion. Turns out, they all have a motive to kill him. Daniel Craig adds to the humor as Benoit Blanc, the "last of the gentleman detectives." Plummer's dysfunctional family fills out with a lively bunch of stars, including Chris Evans, Jamie Lee Curtis, Michael Shannon, Don Johnson, and Toni Collette. The family takes a back seat to beautiful Ana de Armas, the patriarch's loyal and good-hearted nurse, who emerges as the prime suspect. Her character includes a creative tic: She vomits when she lies. For the sake of social commentary, no one in the family can remember which Central or South American country Ana comes from, while the other suspects enjoy bringing up the immigration status of Ana's mother. "Knives out" balances old school mystery with comedy. I think the comedy succeeds best. The result isn't great, but good, light fun.
Posted by Arch Campbell at 12:59:00 PM