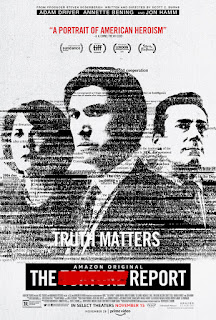 Charismatic Adam Driver huffs & puffs as U.S. Senate investigator Daniel Jones, who outed the CIA's torture practice after 9/11. "The Report" boils down to a lot of speechifying about these uncomfortable actions. 1 star, rated "R."
Told in the style of "All the President's Men," "The Report" resorts to furrowed eyebrows from Annette Bening as Senator Dianne Feinstein, and passionate speechifying by Adam Driver, as U.S. Senate investigator Daniel Jones. In spite of the importance of Jones' findings and the issues presented, 'The Report" feels long and dull. A fine cast includes Jon Hamm, Ted Levine, Matthew Rhys, Tim Blake Nelson and even Sarah Goldberg (from "Barry.") Unfortunately, they can't save the overly talky script.
Posted by Arch Campbell at 2:40:00 PM