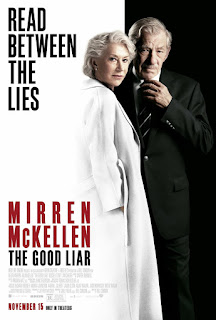 Charming con artist Ian McKellen hopes to swindle attractive widow Helen Mirren. Boy, does he pick the wrong pigeon. "The Good Liar" has great fun with the two icons, even when the script gets creaky. 2½ stars, rated "R."
"The Good Liar" doesn't break new ground in the con & double con genre. It does have fun with Ian McKellen as an old rogue, trying to steer Helen Mirren into one of his schemes. Jim Carter, best known as Mr. Carson on "Downton Abbey" adds a nice touch as a McKellen henchman. The plot twists arrive slowly. This gets irritating because you know something's coming. Together, McKellen and Mirren cover a variety of script sins.
Posted by Arch Campbell at 11:55:00 AM