A Beautiful Day in the Neighborhood Review - 4 Stars 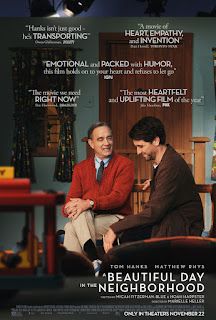 Movies don't get much more mainstream or recommendable than "A Beautiful Day in the Neighborhood." Tom Hanks represents the perfect choice to play Fred Rogers, the kindly PBS host. The script echos his friendship with a skeptical writer, played by Matthew Rhys. Production elements, award-worthy acting, and a touching script combine for an experience worth four stars.
In 1998, Esquire Magazine assigned edgy writer Tom Junod to profile Fred Rogers as part of a series on heroes. During their days together, Rogers overcame Junod's skepticism. The two remained friends during the final years of Rogers' life. "A Beautiful Day in the Neighborhood" bases its story on Junod's article, changing the writer's name to Lloyd Vogel, and dramatizing his relationship with his father, including a few punches and angry confrontations for the sake of drama. During his lifetime, Fred Rogers appeared ripe for parody. Check out his interview on YouTube with David Letterman in the early 1980s. and see him win over one of the edgiest performers of that time. I watched a Q&A session with the screenwriters at the Middleburg Film Festival, in which the audience called them out on their embellishing of Vogel's story. I don't think it matters. Some viewers may want more of Tom Hanks and less of the troubled writer. The balance of the two worked for me. "A Beautiful Day in the Neighborhood" tells a beautiful story for families going to the movies during the holidays. It allows us to believe in the power of kindness and friendship.
Posted by Arch Campbell at 10:57:00 AM