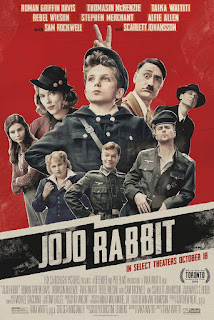 Jojo Rabbit threads the needle between comedy and tragedy. Young Roman Griffin Davis won me over as a ten-year-old in Nazi Germany who conjures Hitler as his imaginary playmate. Funny, touching and tragic all-in-one. 3½ stars, rated "PG-13."
"Jojo Rabbit" channels "The Producers" in the story of a gung-ho kid who joins the Nazi youth during World War II, and imagines Hitler as his "special" friend. Director Taika Waititi makes an outrageous Hitler. Scarlett Johansson, Sam Rockwell, and Rebel Wilson add comedy and drama. Best of all is Roman Griffin Davis as the ten-year-old, central to the plot. Said plot turns serious when he discovers his mother working against Hitler, while hiding a young Jewish girl (Thomasin McKenzie) in their home. Be prepared for your laughs to turn to tears, when this story turns serious.
Posted by Arch Campbell at 11:53:00 AM