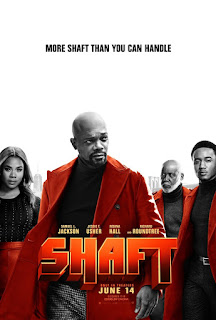 Jessie Usher holds his own with screen legends Samuel L. Jackson and Richard Roundtree as the third generation Shaft. Old school meets millennial in this sly R-rated comedy. 3 stars, rated "R."
"Shaft" begins with the iconic theme and graphics, and introduces us to Samuel L. Jackson in a 1989 shootout. Updating to current times, we meet Jessie Usher, an FBI cyber security expert, who hates guns and avoids violence... the opposite of his father and grandfather. When a friend dies a suspicious death, the youngest Shaft must reconnect with father and grandfather to solve the case. The plot is the same old thing; but the comedy and clash of generations make this story fun. Samuel L. Jackson is hard to resist, and the moment they recruit the original Shaft delights.
Posted by Arch Campbell at 4:59:00 PM