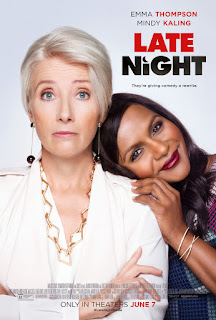 "Late Night" goes beyond the obvious mix of "The Devil Wears Prada" and "Broadcast News." Emma Thompson delights as a toxic TV host, whose job is on the line. Mindy Kaling arrives to satisfy diversity and gender concerns. Sparks fly in this funny, easy-to-watch comedy worth 3 solid stars, rated "R."
Mindy Kaling wants to work in television comedy. She gets her wish when Emma Thompson's company hires her as a bow to gender and diversity concerns. Emma oozes contempt for her new hire, as well as her old all-male writers. She's on the ropes as her network wants to replace her with someone younger and edgier. Kaling writes a funny, easy-to-like script that veers away from realism toward the end. That's OK. "Late Night" delivers great fun all the way through.
Posted by Arch Campbell at 10:31:00 AM