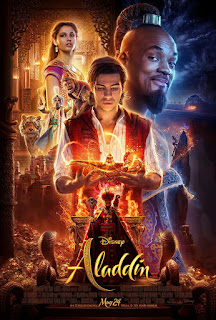 Aladdin - Rated PG, 2 stars. Disney's live-action remake of the 1993 animated classic tries too hard and feels like work.
The new live action "Aladdin" follows the plot of the 1993 cartoon, with a few contemporary additions. Aladdin (Mena Massoud) a petty thief in an Arabian city, meets beautiful princess Jasmine (Naomi Scott) and falls in love. But law decrees she must marry a prince. Captured by Jafar, the sultan's ambitious Royal Vizier, Aladdin is sent to the Cave of Wonders to retrieve a magic lamp. One rub and out comes Genie (Will Smith.) Aladdin gets three wishes, and uses his first to become a Prince, the better to win the love of Jasmine. The remake features most of the songs of the original, including "A Whole New World." The soundtrack plays full blast, so as to cram the music down our throats. Will Smith whisks across the screen, trying unsuccessfully to suggest Robin Williams' performance. The actors who play Aladdin and Jasmine are likable. Everyone tries, but they try too hard. The 1993 animated cartoon felt fresh and fun. This live-action remake feels like work.
Posted by Arch Campbell at 9:36:00 PM