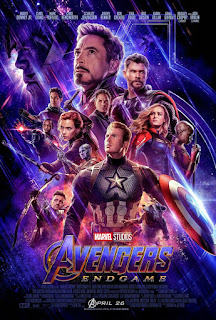 "Avengers: Endgame" rolls every character from the Marvel comic universe into a three-hour and one-minute, revenge-fueled epic. OK, maybe not an epic like "Lawrence of Arabia" or "The Godfather," but epic in comic book terms. I remember (and like) many of the movie characters in this cast, including "Iron Man" (Robert Downey Jr.,) "Captain America" (Chris Evans,) "Ant Man" (Paul Rudd,) Thor (Chris Hemsworth) plus the casts of "Black Panther" and "Guardians of the Galaxy." That list comes off the top of my bald head. A friend counted 31 Marvel characters in this saga, which continues the previous chapter "Infinity War," when bad guy Thanos (Josh Brolin) collects a series of Infinity Stones, and wipes out half the Universe. Of course, this installment resorts to time travel, explained in a scene that gave me a brain freeze. Oh, and did I mention Mark Ruffalo returns as "The Incredible Hulk," and Jeremy Renner returns as Hawkeye, and Scarlett Johansson and Don Cheadle, and Tessa Thompson returns, and an actress named Karen Gillan stands out as a character named Nebula and, who am I leaving out? Maybe that's the point. Characters, fans love from previous films, team up to save the world and undo the damage of the previous chapter. I got seriously lost (in the plot) about an hour deep. "Avengers" fans won't. And even when I got lost, I loved the ending... a curtain call of characters rolled into one giant event. "Avengers: Endgame," 3 stars, rated PG-13. Three hours and one minute long. Does it deliver what it promises? Review-proof blockbuster. Is it entertaining? For fans. Is it worth the price of admission? You know who you are.
Posted by Arch Campbell at 9:00:00 PM