They Shall Not Grow Old Review - 4 Stars 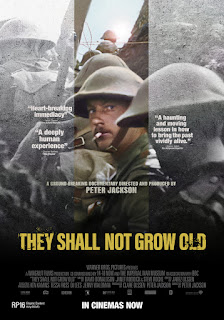 "They Shall Not Grow Old" combines technology and humanity in an extraordinary World War I remembrance. To mark the century since the armistice, England's Imperial War Museum gave director Peter Jackson unlimited access to the center's film and audio archives. Jackson wisely uses modern technology to correct speed and focus, and adds impact with the addition of color. The result puts us in the shoes of those in the trenches, pulling no punches and showing the filthy condition of trench warfare. Most powerful are shots of young boys about to storm no man's land with little hope of returning. "They Shall Not Grow Old," 4 stars, unrated but worthy of an "R." Does it deliver what it promises? Powerful documentary. Is it entertaining? Artfully produced. Is it worth the price of admission? One of the year's most extraordinary films.
Posted by Arch Campbell at 11:18:00 AM