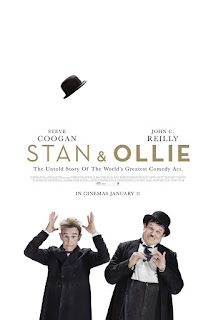 I discovered Laurel and Hardy as a kid in the 1950s, one of the new generation who loved the TV reruns of of their 1930s comedy shorts and feature films. I still love their off-kilter relationship and slapstick comedy. "Stan & Ollie" opens with the team at the top of their popularity in 1937. John C. Reilly as Oliver Hardy and Steve Coogan as Stan Laurel immediately establish their characters, while hinting at the sentimental story to come. We follow them on the backlot, as they discuss ex-wives, money problems and negotiating a better deal with Hal Roach Studios, even though Laurel's contract ends months before Hardy's. That established, we jump ahead 16 years to 1953, when the pair try to revive their career with a comeback tour of England. By this time, Hardy is old and more overweight with bad knees and heart trouble. Laurel continues to do the writing and producing, with lesser results. "Stan & Ollie" tells a backstage drama of a partnership less easy than it looked. Reilly and Coogan bring love to their roles, including some delightful recreations of Laurel and Hardy's greatest hits. The ending scenes bring a smile, and for many, a smile through tears. "Stan & Ollie," rated PG-13, 3½ stars. Does it deliver what it promises? Nostalgic tribute to beloved performances. Is it entertaining? Delightful. Is it worth the price of admission? A winner.
Posted by Arch Campbell at 3:13:00 PM