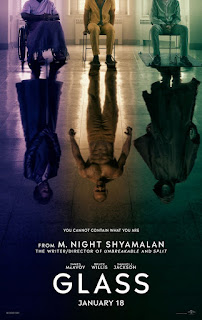 Fans of M. Night Shyamalan's previous head-scratchers "Unbreakable" and "Split" might get a tingle from "Glass." The new thriller combines Bruce Willis and Samuel L. Jackson of "Unbreakable," with James McAvoy of "Split." Willis doles out vigilante justice after surviving a train wreck, devised by Jackson's character Mr. Glass in "Unbreakable." James McAvoy returns from "Split." He has double-digit personalities, including "The Beast," a sort of Incredible Hulk character with even more anger issues. The role lets McAvoy improvise like a first year drama student, changing from personality to personality and then pumping up for the superhuman strength of "The Beast." The three characters converge in a maximum care facility run by a no-nonsense Sarah Paulson. Anya Taylor-Joy returns as one of McAvoy's survivors in "Split," and Spencer Treat Clark plays Willis' protective, now grown-up son from "Unbreakable." "Glass" crawls for two slow hours, often stopping for mind-numbing dialog and explanations. It ends with too many false starts and a final twist that fizzles. I see my glass as half full, but this one's empty. "Glass," rated PG-13, 1 star. Does it deliver what it promises? Stitches together characters from earlier movies. Is it entertaining? Slow. Is it worth the price of admission? Fans only.
Posted by Arch Campbell at 10:28:00 AM