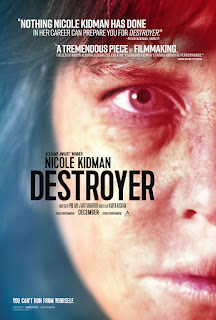 Nicole Kidman keeps busy. She shows up in a half-dozen recent films, including "Boy Erased" and "Aquaman." She has wonderful range, talent and big screen beauty. Her latest, "Destroyer" works hard to erase that beauty, in favor of letting the inner actress shine. Kidman plays a burnt out L.A. detective. She flashes back to her youth as an undercover member of a gang of thieves, when the leader turns up dead by the side of the road a generation later.  Now Kidman must settle old scores.  "Destroyer" makes Kidman so gritty, it turns distracting. She has bad teeth, cracked skin, a dysfunctional life and does a lot of drinking. I get it: The character's had a hard life. The result becomes painful to watch. I pass. "Destroyer," 1 star, rated "R." Does it deliver what it promises? Gritty L.A. cop mystery, but hard to watch. Is it entertaining? Kidman's look actually distracts. Is it worth the price of admission? A tumble. One of this year's award contenders (Regina King of "If Beale Street Could Talk") played a similar role to greater effect in the TV series "Southland." Just sayin'.
Posted by Arch Campbell at 11:57:00 AM