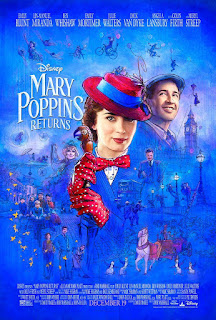 Look! Up in the sky! It's Mary Poppins! She's returning for the holidays and a box office bonanza. This kind of project, cashing in on the beloved 1964 classic, could have gone wrong in a hurry. I'm glad to report it's lighter than air. Emily Blunt takes the Julie Andrews role. Her singing sounds fine. Her character brings a wry spiciness to the story. Blunt teams with Lin-Manuel Miranda, who plays one of Dick Van Dyke's apprentices. Miranda mugs a little too often: He might feel more comfortable on stage. Mainly, he stays out of the way. Poppins returns to save the family of the children from the first film. The new Mr. Banks (played by Ben Whishaw) must recover from the death of his wife, an event that caused him to mortgage the family home. If he doesn't come up with the money, mean old Colin Firth will foreclose. Blunt and the children share animated musical interludes... some so good, they made the audience applaud. The production features surprise cameos and a lovely segment with Dick Van Dyke, who does a little dancing and a lot of charming. The holidays need this kind of return. "Mary Poppins Returns," 3½ stars, rated "PG." Does it deliver what it promises? Exactly. Is it entertaining? Certainly. Is it worth the price of admission? Count on it.
Posted by Arch Campbell at 6:07:00 PM