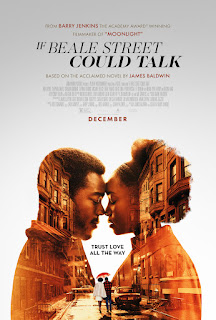 "If Beale Street Could Talk" belongs among the year's best films, based on James Baldwin's 1974 novel of love and struggle. Director Barry Jenkins converts Baldwin's words to artful voice-over, setting up a story of lifelong lovers and wrongful injustice. "Beale Street" has quiet sentimentality. The lead performers (Stephan James and Kiki Layne) hit the mark. Regina King contributes an Oscar bid performance, as a mother sacrificing for the next generation. This 1970s novel feels fresh. "If Beale Street Could Talk," 4 stars, rated "R." Does it deliver what it promises? Timeless drama. Is it worth the price of admission? Award-worthy production and performances. Is it worth the price of admission? One of the year's must-sees.
Posted by Arch Campbell at 11:39:00 AM