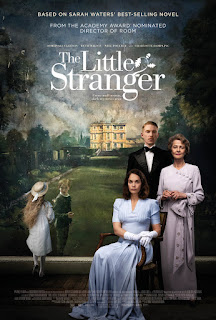 "The Little Stranger" presents a beautifully produced period telling of the standard issue haunted house tale. English country doctor Domhnall Gleeson makes a house call to aid a house maid working in a once grand, but now declining Hundreds Hall. Soon he returns to care for elderly Charlotte Rampling and her children. A son, played by Will Poulter, suffers from PTSD. A daughter played by Ruth Wilson, adds a chance for budding romance. The old house creaks with the spirit of a deceased young daughter. "The Little Stranger" avoids a big reveal. The frights stay psychological. The script touches on class distinction and changing times. The result feels like Sunday night on PBS... tasteful and quiet, even though it's another version of the same old thing. "The Little Stranger" 2½ stars, rated "R." Does it deliver what it promises? Haunted house story. Is it entertaining? Thoughtful yet slow. Is it worth the price of admission? For a rainy day.
Posted by Arch Campbell at 12:04:00 PM