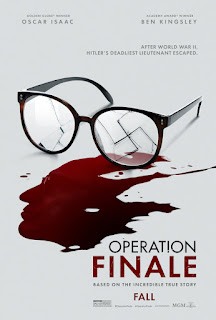 The capture of escaped Nazi Adolph Eichmann, living in Argentina under an assumed identity 15 years after the war is one of the great triumphs of Israeli history. "Operation Finale" recreates the event, with Ben Kingsley as the accused architect of the Holocaust, and Oscar Issac as the agent who captures, extracts, and brings Eichmann to trial in Israel. In spite of a great cast, "Operation Finale" suffers from a talky script and lack of tension. This story has been told before often as a made-for-television movie.  "Operation Finale" serves as a pedestrian reminder. "Operation Finale," 2 stars, rated "PG-13." Does it deliver what it promises? Historic reminder. Is it entertaining? Slow and overly talky. Is it worth the price of admission? Feels like a made-for-television movie and might play better On Demand.
Posted by Arch Campbell at 11:40:00 AM