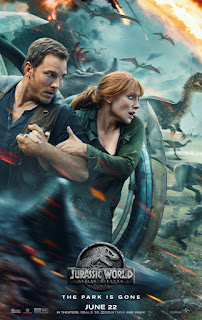 Here we go again. In "Jurassic World: Fallen Kingdom," the dinosaurs from the last movie face a volcano eruption and certain death. In real life, most would breathe a sign of relief and let nature take its course. But in this world, Bryce Dallas Howard has created a dinosaur rights group. When a wealthy benefactor begs her to save the creatures, she jumps at the chance. She recruits on-again, off-again boyfriend Chris Pratt. Neither figure out those asking them to return have sinister motives. Soon, the betrayed couple must outrun a volcano and stow away on the boat taking the creatures to Northern California, as if California doesn't have enough problems already. "Jurassic World: Fallen Kingdom" relies on impressive special effects. The writers insert a plot about a child hiding under the covers, lest a marauding dinosaur eat her. The bad guys explain their villainy in the usual cliched scene, and a dinosaur auction attended by the world's worst despots feels silly. "Jurassic World: Fallen Kingdom" runs two hours and eight minutes. It feels like forever. "Jurassic World: Fallen Kingdom, - rated PG-13, 1 star. Does it deliver what it promises? The usual. Is it entertaining? Predictable. Is it worth the price of admission. Go if you must. I pass.
Posted by Arch Campbell at 4:43:00 PM