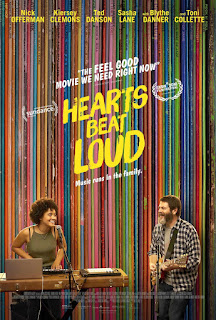 Single father Nick Offerman comes to a crossroads in "Hearts Beat Loud." His vinyl record store is failing, his mother (Blythe Danner) needs care, and his daughter (Kiersey Clemons) plans to leave Brooklyn for UCLA medical school. That daughter often functions as the adult in the family, while Offerman moons over his lost career as a musician. But father and daughter share a love of music. A late night session reveals they might have promise as a duo, adding tension to Kiersey's UCLA plans. "Hearts Beat Loud" rolls out in gentle scenes, aided by character appearances from Toni Collette as a not quite love interest, Ted Danson as a bar owner and friend, and Sasha Lane as Kiersey's budding romance. "Hearts Beat Loud" adds depth in subtly revealing the family's back story. "Hearts Beat Loud," rated PG-13, 3 stars. Does it deliver what it promises? Thoughtful story of a father-daughter relationship. Is it entertaining? Charming and surprising. Is it worth the price of admission? A gem.
Posted by Arch Campbell at 11:57:00 AM