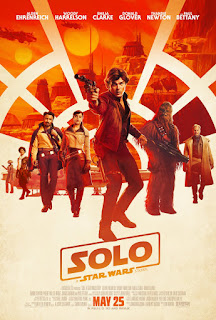 "Solo: A Star Wars Story" fills us in on the story of Han Solo, before we met him in the original "Star Wars." We discover Han's difficult childhood, his desire to fly, and the poker game in which he wins the Millennium Falcon. We meet the girl (played by a sultry Emilia  Clarke) who breaks his heart. "Solo: A Star Wars Story" follows almost the exact structure of the 1977 movie. It feels familiar, but doesn't feel new or creative. Alden Ehrenreich seems fine as a younger Harrison Ford, just not as exciting. Donald Glover adds some spark as a rogue adventurer. Woody Harrelson, Paul Bettany and Thandie Newton don't get much in this script. "Solo: A Star Wars Story," 2 stars, rated PG-13. Does it deliver what it promises? Uninspired Star Wars knock off. Is it entertaining? Occasionally catches fire. Is it worth the price of admission? For fans.
Posted by Arch Campbell at 5:37:00 PM