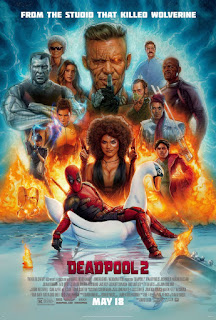 "Deadpool 2" presents a superhero movie for people who don't like superhero movies. The new installment continues the saga of Ryan Reynolds in a rubber mask (thanks to an experiment gone wrong) wise cracking his way through a series of adventures. Reynolds must face off with Josh Brolin, also the villain in the epic "Avengers: Infinity Wars." Brolin's character is named Cable, but Deadpool refers to him as Thanos (from the Avengers) or John Connor (from The Terminator.) Deadpool must stop a kid named Russell from going rogue, thus undoing the tragic fate of Cable's world. The jokes fly fast and furious. A segment in which Deadpool recruits a group of hapless mutants qualifies as one of the season's funniest and bloodiest. "Deadpool 2," 3 stars, rated "R." Does it deliver what it promises? Hilarious anti-superhero movie. Is it entertaining? If you can keep up. Is it worth the price of admission? A delight.
Posted by Arch Campbell at 2:46:00 PM