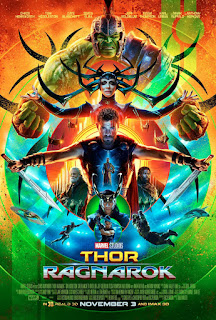 "Thor: Ragnarok" launches a third adventure for Chris Hemsworth as the God of Lightning. Thor's father (Anthony Hopkins) retires and disappears, touching off a family feud between Thor and his sister Hela (played with relish by A-list actress Cate Blanchett.) "Thor:  Ragnarok" lays on the big names, including cameos and sub plots for Tom Hiddleston, Jeff Goldblum, Benedict Cumberbatch and Tessa Thompson. The episode mixes humor and action, but often my poor brain overloaded on references to earlier movies. Blanchett lays on the wise cracks to good effect. Jeff Goldblum enjoys some entertaining moments as a space wheeler dealer. I found the two hour, 10-minute running time overlong. Sometimes the mix of action and humor feels jarring. After the screening, a pal said 'They didn't make this for you." "Thor: Ragnarok," 2 stars, rated PG-13. Does it deliver what it promises? Marvel Action film for fans. Is it entertaining? Sometimes the action and humor don't mix. Is it worth the price of admission? For fans.
Posted by Arch Campbell at 10:51:00 AM