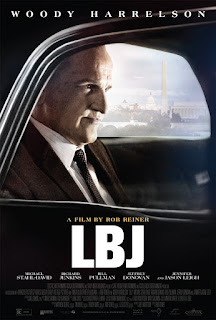 Woody Harrelson vanishes under a ton of makeup to play President Lyndon Johnson in "LBJ." Rob Reiner's reverential film concentrates on Johnson's time as John Kennedy's Vice President, and the shock of ascending to power after the assassination of President Kennedy. "LBJ" celebrates Johnson for taking up Kennedy's vision and passing the 1964 Civil Rights Act. The film recreates well-known moments, including the assassination in Dallas. The choice of generic patriotic music (which swells when Johnson delivers various speeches) feels manipulative. This film avoids Vietnam, the war that undid Johnson's presidency and career. As one in a long chapter of Johnson's career, it's interesting and worth watching, even if it's not the entire story. "LBJ," 3 stars, rated "R." Does it deliver what it promises? Johnson and civil rights. Is it entertaining? Interesting history. Is it worth the price of admission? Good enough.
Posted by Arch Campbell at 4:53:00 PM