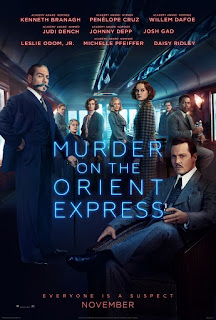 Kenneth Branagh remakes the beloved 1974 film of Agatha Christie's classic mystery with love and more than a few hammy touches. Branagh plasters a widescreen mustache across his face, a humorous clue to the character Hercule Poirot, the world famous Belgian detective with the amazing ability to determine "Who done it?" On board the luxury Orient Express, he's called into service when the shady character played by Johnny Depp dies of multiple stab wounds in his compartment bed. The suspects comprise an all star cast: Willem Dafoe, Judi Dench, Penelope Cruz, Michelle Pfeiffer among them. Most adult viewers will already know who done it, and newcomers can likely figure it out. The actors, their clothing, and especially the luxury train look beautiful. Branagh fills his remake with old school touches: suspects gathering in the dining car, an avalanche stopping the train in its tracks, a flashback to another murder and the hint of revenge. "Murder on the Orient Express" takes its time, just as you might expect of a project that favors style over substance. "Murder on the Orient Express," rated PG-13, 2½ Stars. Does it deliver what it promises? Old school murder mystery. Is it entertaining? Looks great, and showcases an all-star cast. Is it worth the price of admission? Not a must-see, but good enough.
Posted by Arch Campbell at 4:33:00 PM