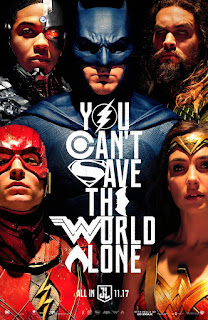 DC Comics puts its biggest names into one gigantic movie in an effort to build on the success of the well-received "Wonder Woman." Gal Gadot remains incredibly charismatic in "Justice League." It's hard to take your eyes off her. Unfortunately, she has to share the stage with Ben Affleck as Batman, Ezra Miller as the Flash, Jason Momoa as Aquaman and Ray Fisher as Cyborg, not to mention a dash of Henry Cavill as Superman. All these characters make for a complicated and often hard-to-follow story. "Justice League" sticks to the usual, somewhat tired formula. The characters must save the world from a really bad guy... in this story, named "Steppenwolf," who's accompanied by swarms of bat-like insects who thrive on fear. There's not much beyond the usual mix of heroes, villains, special effects and loud noises for two hours or more. "Justice League" will replace "Thor: Ragnarok" in many theaters, and some will find them hard to distinguish. 2 stars, rated PG-13. Does it deliver what it promises? The usual. Is it entertaining? For fans. It is worth the price of admission? For fans, but not really for adults.
Posted by Arch Campbell at 3:34:00 PM