Mark Felt: The Man Who Brought Down the White House Review - 2 Stars 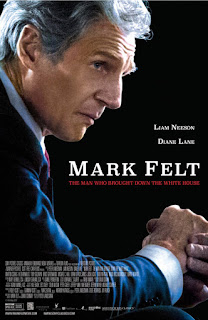 "All the President's Men," Hollywood's version of Woodward and Bernstein's reporting on the Watergate scandal, has a place among the great movie thrillers. The young reporters follow clues, doled out by a dissatisfied government official named Mark Felt. The more they discover, the more powerful forces threaten them. "All the President's Men" has the excitement of a detective story, but 'Mark Felt," the story of the man who leaked the information, has only a dour character unhappy in marriage, family, and career. The fine actor Liam Neeson whispers his dialog, and spends most of his time in shadow. His meeting with Bob Woodward in the Arlington garage feels anticlimactic. Felt's motivation seems to boil down to anger over not getting the top FBI job when J. Edgar Hoover dies. Some stories deserve to remain a mystery. "Mark Felt: The Man who Brought Down the White House," rated PG-13, 2 stars. Does it deliver what it promises? Unexciting would-be thriller. Is it entertaining? Low energy. Is it worth the price of admission? A disappointment.
Posted by Arch Campbell at 4:18:00 PM