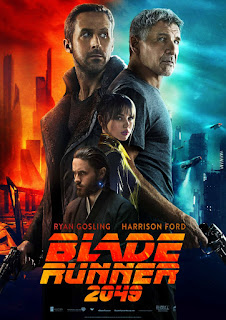 Thirty-five years ago, "Blade Runner" combined 1940s noir with science fiction, creating a great role for Harrison Ford, as a world-weary, futuristic policeman assigned to hunt down lifelike replicants who unfortunately have developed the ability to think for themselves. The sequel, "Blade Runner 2049," casts Ryan Gosling as a next generation tracker, still hunting rogue bots. A great cast includes Robin Wright as Gosling's boss, plus stunning Ana de Armas as a girlfriend named Joi, and Sylvia Hoeks as Luv, a woman determined to get what she wants. Jared Leto has some creepy scenes as the creative mind behind the bots. At two hours and forty minutes, "Blade Runner 2049" packs in a ton of special effects, loud noises, and plot twists. All this sizzle sometimes makes the story plodding and ponderous. The original left viewers thinking about the meaning of life and humanity. The sequel takes that even further. "Blade Runner 2049" gives a lot to ponder, but feels slow and too long. I wanted to love "Blade Runner 2049."  I only liked it, and that's a bit of a disappointment. "Blade Runner 2049," 3 stars, rated "R." Does it deliver what it promises? More of the original. Is it entertaining? Impressive, but long. Is it worth the price of admission? For fans.
Posted by Arch Campbell at 2:19:00 PM