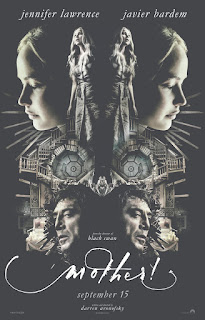 Director Darren Aronofsky appears to use film as a sledgehammer. I remember leaving the screening of "Requiem for a Dream" feeling beat up. "Black Swan" put a knot in my stomach. Now comes "mother!," starring Jennifer Lawrence as the young bride of older, creatively-blocked poet Javier Bardem. The couple move into his Victorian mansion. Lawrence lovingly restores the place, which has been damaged by fire. One night, a strange man (played by Ed Harris) shows up. Bardem invites him to stay the night. Soon, Michelle Pfeiffer arrives. Inappropriateness turns into madness, leading to death and new life. And then things get really weird. Aronofsky has a gift for visuals, the creepier the better. I can only imagine what one might find in a frame-by-frame analysis of "mother!." Weirdness builds on weirdness, and for me, ultimately turns disgusting. I found the first third of "mother!" intriguing, then in the middle, I got a little annoyed; but by the conclusion, I'd had enough. I left "mother!" thinking "get me out of here now." "mother!," rated "R," zero stars. Does it deliver what it promises? Weird. Is it entertaining? Punishing. Is it worth the price of admission? In a word, no.
Posted by Arch Campbell at 9:04:00 AM