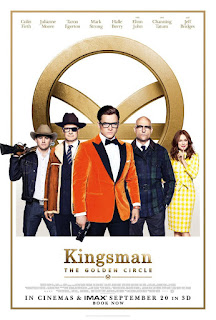 "Kingsman: The Golden Circle" follows the surprise success of the original "Kingsman," in which Colin Firth trains street smart Taron Egerton in the ways of the Kingsman, a secret league of gentlemen crime fighters. In the new movie, the kid takes over for reasons, those of you who saw the original already know. This being a sequel, Colin First returns, even though he apparently died in the first episode. The new "Kingsman" aims for laughs in a plot involving super villain Julianne Moore, who controls the world's supply of recreational drugs. She poisons the drugs, in order to hold the fun people of the world hostage to her antidote. The British Kingsman team up with the American arm, a group of Kentucky good ol' boys, masquerading as whiskey distillers. They include Jeff Bridges, Channing Tatum, Pedro Pascal and Halle Berry. Meanwhile, back at the drug cartel, Julianne Moore holds Elton John hostage, giving him the opportunity to hiss his "F" bomb-laden dialog and provide the movie with its biggest laughs. The comedy overpowers the action, which feels unnecessary. At two hours plus, "Kingsman" should have gone all comedy, and downplayed the action. A good editor could have made this twice as fun. "Kingsman: The Golden Circle," rated "R," 2½ stars. Does it deliver what it promises? Follow up to a very successful original. Is it entertaining? Not as good as the first, but very funny at times. Is it worth the price of admission? Why not?
Posted by Arch Campbell at 4:17:00 PM