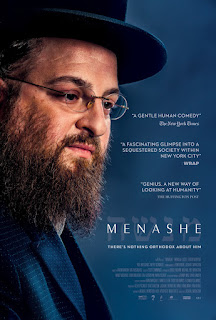 "Menashe" provides a documentary style window on Hasidic culture in Brooklyn. The title character, played by Menashe Lustig, pines for his son, who according to tradition must be raised in a home with both a mother and father. The boy's mother died, leaving Menashe a widower, who according to tradition, cannot raise his son until he remarries... something he has little inclination to do. The boy lives with Menashe's strict brother-in-law, who provides financial comfort Menashe, who struggles working as a hapless grocery store clerk can't. His humanity includes bad choices, temper outbursts, and behavior putting him on the margins of Orthodox life. But he loves his son, and he respects his culture. Filmed in Yiddish (and subtitled in English) I doubt this small gem will attract a large audience; but I predict the few that come upon it, will remember it long after viewing. Does it deliver what it promises? Cultural window on an unusual culture. Is it entertaining? Touching and moving. Is it worth the price of admission? A gem.
Posted by Arch Campbell at 12:30:00 PM