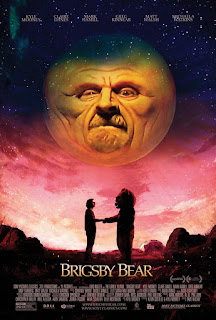 Saturday Night Live performer Kyle Mooney plays a man child, living in an underground hideaway with his parents in "Brigsby Bear." Those parents include Mark Hamill (yes, that Mark Hamill) and Jane Adams, who remind him the outside world is toxic and can only be experienced on occasional, supervised visits. But then, everything changes. Authorities invade the bunker and inform Kyle he was kidnapped at birth. This comes as a shock, because he loved his life with them, including his favorite TV show "Brigsby Bear," which his parents produced in a nearby studio, delivering weekly episodes on VHS to keep him entertained. Of the jolts in his new world, the most painful is the absence of the "Brigsby Bear" show. So with his real family, Kyle sets out to finish the series, and possibly find entry into the real world. "Brigsby Bear" feels just a bit too precious at first. Mooney, whose specialty is cringeworthy humor, slowly but surely grows on you. A nice cast includes Greg Kinnear as a helpful police officer, Matt Walsh and Michaela Watkins (as the real parents) and Ryan Simpkins as Kyle's eye-rolling sister. "Brigsby Bear" also answers the question, "Whatever happened to Mark Hamill?" The "Star Wars" star has a touching prison reunion with his onetime son worth watching. "Brigsby Bear," 2½ stars, rated PG-13. Does it deliver what it promises? Cringeworthy man-child comedy. Is it entertaining? Several smiles, rather than laughs. Is it worth the price of admission? Feels like an extended "Saturday Night Live" skit, but that's OK.
Posted by Arch Campbell at 8:08:00 PM