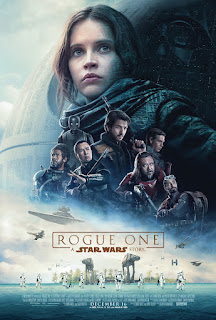 The people behind the new "Star Wars" sidebar "Rogue One" have a vision: They see gigantic piles of money coming with this new movie and with good reason. Most "Star Wars" fans can't get enough, even if this new entry doesn't advance the story. "Rogue One" tells what happened just before the original 1977 adventure. A young girl named Jyn hides, as the usual army of storm troopers eliminate her mother and spirit away her father. The bad guys desire Jyn's father's scientific mind, as they envision forcing him to create the "Death Star," which figures so prominently in the 1977 adventure. Time moves forward, and that small girl grows into British actress Felicity Jones. She joins a splinter group of rebels who remind us of the group of rebels assembled in each of the "Star Wars" episodes. Felicity's team includes a smart guy played by Diego Luna, a pilot played by Riz Ahmed, a wisecracking droid voiced by Alan Tudyk, and Donnie Yen, a blind mystic who believes in the Force. "Rogue One" has space fights that echo the look of the 1977 movie. Ben Mendelsohn provides the usual villain. The new characters seem fine, but they can't come close to the few scenes involving a very angry Darth Vader. Compared to Darth, the cast of "Rogue One" feels generic. Felicity Jones has earned a fine reputation as a movie actress; but I'm not sure she's at her best playing an action hero. "Rogue One" seems fine... Just don't go expecting greatness. 2½ stars, PG-13 for violence and a lot of killing. Does it deliver what it promises? More "Star Wars." Is it entertaining? Diverting. Is it worth the price of admission? For fans.
Posted by Arch Campbell at 12:16:00 PM