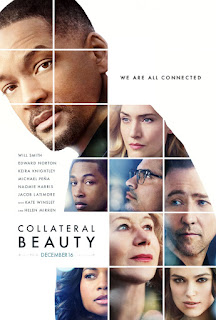 Will Smith continues his run of audience-pleasing stories in "Collateral Beauty." He stretches his acting muscles a bit as a grieving father who shuts down following the death of his six-year-old daughter from cancer.  In the opening scene, we see Smith as a charismatic ad agency co-owner giving a pep talk to his employees. In the next scene, three years have past, and we find Smith shut down, rarely speaking, spending his days building domino structures and watching them tumble. Smith's colleagues, played by A-list actors Ed Norton Jr., Kate Winslet and Michael Pena feel the effect of Smith's depression. Their agency is about to go under, unless they can sell to another company; but it can't happen without Smith's participation. In an effort to bring him back to life, Norton discovers Smith has written letters of complaint to "Time," "Love" and "Death." In an effort to bring him out of his misery, Norton hires a small acting company to convince Smith he's receiving visits from these concepts. More A-list actors appear, including Helen Mirren as "Death," Keira Knightley as "Love" and Jacob Latimore as "Time." "Collateral Beauty" revels in its echoes of "It's a Wonderful Life," and that's not necessarily bad. Most viewers can figure what's coming, including the twists toward the end. "Collateral Beauty" often feels manipulative; although Smith fans probably won't mind. In spite of grief and even death, it's still a wonderful life. 2½ stars, PG-13. Does it deliver what it promises? Will Smith holiday story. Is it entertaining? Don't expect any new ground, but do expect the warmth of the familiar. Is it worth the price of admission? Won't disappoint Will Smith's audience.
Posted by Arch Campbell at 12:30:00 PM