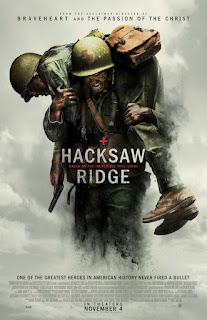 Mel Gibson directs one of the most interesting true stories of World War II, "Hacksaw Ridge." Desmond Doss, played as an adult by the fine actor Andrew Garfield, grows up religious in rural Virginia during the depression. When war comes, he answers his draft call and agrees to serve as a conscientious objector. Gibson lays on the 1940's icons... a sweet girl back home, a platoon full of characters, a wisecracking Sergeant played by Vince Vaughn, and a drunken father whose demons inspire Doss to a life of non-violence. Once accepted by his platoon, after a near court-martial and hazing from his unit, Doss goes into battle. Gibson lays on the violence of war, using five shots of flame throwers burning soldiers (where one would do) busting open a dozen soldier's heads (when one would just as easily make the point.)  I suppose it's ironic that Gibson has created one of the most violent movies about non-violence; but the lack of subtlety gets in the way. The violence almost overshadows Doss' bravery, as he painstakingly lowers dozens of his wounded comrades down a ridge, one by one for medical attention (all the while under enemy fire.) I left the theater wishing Clint Eastwood had directed. Does it deliver what it promises? Great story from the greatest generation. Is it entertaining? The violence pummels the viewer. Is it worth the price of admission? A misfire.
Posted by Arch Campbell at 5:46:00 PM