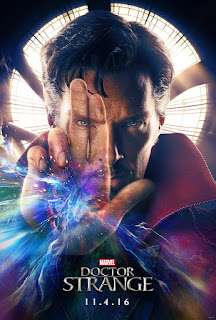 The excellent Benedict Cumberbatch brings prestige and talent to the new Marvel superhero "Doctor Strange." Cumberbatch begins this story as an arrogant surgeon, possibly the world's greatest. One night speeding on a mountain road, he looks away, smashes his car, and wrecks his body and most importantly his hands. Unable to perform surgery, Dr. Strange searches for a cure. He discovers the world of the Ancient One, a mystic played by Tilda Swinton, looking very cool with a shaved head. She promises to teach him the secrets of the universe. "Doctor Strange" pushes the special effects envelope, as the characters discuss space and time and their relationship. Fans of the graphic novel source material will love this. As a civilian, I found it confusing, but fun and interesting to hear. Rachel McAdams doesn't get much, beyond the usual suffering girlfriend role. Chiwetel Ejiofor adds interest as the Ancient One's second in command. Benjamin Bratt shows up in a couple of scenes, but a tease toward the end reveals the series has plans for him. Mads Mikkelsen plays the evil genius who must be stopped. In spite of a great beginning and many interesting twists, "Doctor Strange" suffers the usual let down of most superhero movies. The last third turns into a fight between good and evil, fitted out with loud bangs and special effects. The first two thirds are a lot of fun; but there's nothing new in the finale. Does it deliver what it promises? Another Marvel hero played by a great actor. Is it entertaining? Snappy dialogue and great special effects. Is it worth the price of admission? For fans.
Posted by Arch Campbell at 12:00:00 PM